When Your Worst Storm Comes 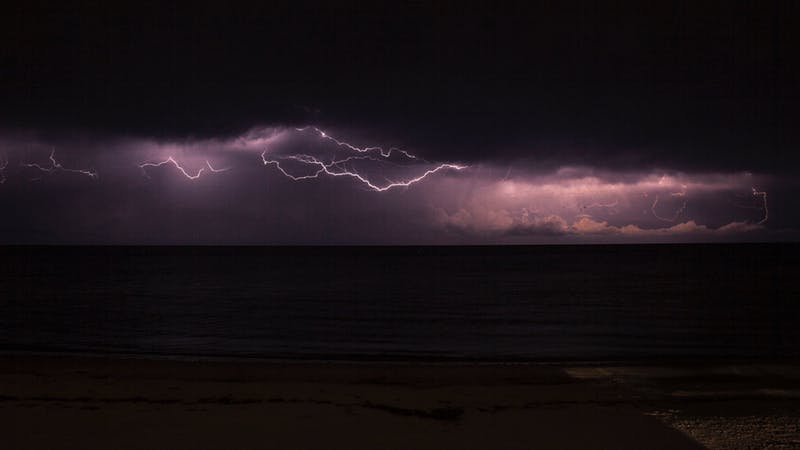 16 Jul When Your Worst Storm Comes

Posted at 07:55h in Blogging by Heather Ward 0 Comments
0 Likes


On July 16, 1999, twenty years ago today, John F. Kennedy Jr’s single-engine Piper Saratoga crashed into the Atlantic Ocean off the coast of Martha’s Vineyard, killing John (38), his wife Carolyn (33), and Carolyn’s sister, Lauren (34). All investigations into the cause of the crash point to a phenomenon called “spatial disorientation.”

Spatial disorientation occurs when a pilot flies into darkness or weather conditions that prevent him from being able to see the horizon or the ground. Points of reference that normally guide his senses disappear. His sensory perceptions become unreliable. He no longer knows which way is up or down. The danger of such disorientation is obvious.

That’s why most planes are equipped with navigational instruments designed to inform pilots of the plane’s attitude, altitude, and groundspeed. If a pilot enters into dark or cloudy conditions where his natural orientation senses become unreliable, he can “fly by the instruments.”

Learning to place more confidence in a plane’s instruments than one’s own intuitive senses, however, requires training. When our mind senses potential danger, especially mortal danger, and urgently commands, “bank right,” while instruments on a dashboard indicate we should, “bank left,” it is very difficult to trust the instruments. As one expert stated, reflecting on the Kennedy crash, “You have to be well trained to disregard what your brain is saying . . . and fly by the instruments.”

“In my dark night of the soul, my doubts and fears were only leading me into deeper confusion and darkness.”

John had not received this training. He was certified to fly in conditions where he could visually distinguish the ground from the sky. However, en route to Martha’s Vineyard he flew into a hazy fog at night, experienced spatial disorientation, and trusted in his perceptions to guide him. Three days later, the Coast Guard located the remains of the plane, and its young passengers, on the floor of the Atlantic.

There is a spiritual parallel. I’ve experienced it. On a spring day in May 1997, I flew into a very dark faith-fog. I lost sight of the points of reference that under normal conditions had kept me flying right. I became spiritually disoriented, and I began to spiral down.

More familiar Christian terms for my experience are a “crisis of faith” or a “dark night of the soul.” I’ve often described it as an eclipse of God. For the first time since I had come to an earnest faith in Christ, he suddenly became completely obscured from my spiritual sight.

This was more than a fog. It was a major storm. The tempest of doubt was like nothing I had experienced before. It grew very dark in my soul, and swirling winds of fear blew with gale force. The turbulence of hopelessness was violent. I couldn’t tell which way was up or down. I was no longer sure about anything I had believed about God or the world or my soul. I lost my senses.

And a lot was at stake. If I chose wrongly: disaster. Choosing wrongly would mean flying the plane of my life on some false course, which sooner or later would end tragically. Knowing the danger, my brain was barking urgent (and sometimes contradictory) commands. I lurched back and forth, banking first one way, then another, trying to regain some sort of reliable direction.

Then one day, after long months in this storm, a thought hit me with unusual clarity: “Jon, fly by the instruments.”

The thought set me thinking over what pilots must do when they can’t trust their sight. They must force themselves to stop trusting their subjective perceptions, and place their faith in what the objective instruments tell them. They must fly by faith, not by sight.

This storm was the darkest, most confusing I had experienced up to that time, but it was by no means the first storm I had flown in. In previous years, God had trained me in various ways to trust his promises over my perceptions, and I had always found his promises more reliable. So now, during this raging storm, when everything seemed uncertain, when I was disoriented and at times near panic, I had a choice: trust my doubt-filled perceptions of reality or trust the instruments of God’s promises. I had received some training; now my very life depended on putting the training into practice.

When our skies are clear and our feet securely on the ground, and we’re just imagining flying through such a storm, it’s easy to envision ourselves calmly relying on the instruments — flying by faith. However, as pilots who’ve undergone training for instrument flight certification will testify, the real experience is nothing like we imagine. We often don’t realize how much we rely on our own perceptions until they are screaming something different than our instruments; when we actually feel the confusing disorientation, all the powerful, compelling impulses, and the fear coursing through us; when it feels absolutely crazy to trust the instruments.

Focus on the Instrument Panel

In my dark night of the soul, I decided to fly by the instruments — to steer by the Bible’s direction until I had enough evidence to determine that it was a faulty instrument. My doubts and fears were only leading me into deeper confusion and darkness. And God’s promises had always given me more light and hope than anything I had ever known. My previous training pointed to the wisdom of doubting my doubts.

“Jesus’s storms, from Gethsemane to Golgotha, were far worse than anything you and I will ever know.”

It was still hard. I still had to steel myself against the fear. And it took a lot longer than I hoped it would. Many times I fought the temptation to ditch the instruments and go with my felt sense of what was true. But I had enough experience and knew enough Bible to know where such “sense” can lead: to nonsense.

So, I kept my focus on the instrument panel. I continued to pursue God in Scripture, I continued to pray, I continued church and small group attendance, whether or not they felt helpful in the moment (and often they did not). I kept on with the work God had given me to do. I opened my heart to trusted friends and mentors, and sought counsel. At one point, John Piper said to me, “The rock of truth under your feet will not long feel like sand.” My thought was, “I hope you’re right. But I doubt it.”

My doubts proved wrong. Eventually, God’s promises proved again to be reliable instruments, and my fears proved again not to be. I didn’t crash. God pierced my cloudy darkness with his light, and I’ll never forget how he did it. The eclipse ended, and God, the great Sun of my life, shown again, illuminating my world (Psalm 36:9).

Now I thank God for every minute of that horrible storm. For it taught me far more than I had previously understood what it means to “walk [fly] by faith, not by sight” (2 Corinthians 5:7). That year influences in some way almost everything I write and speak about.

Always Fly by the Instruments

Having told versions of this story before, I know my metaphorical descriptions raise questions, especially for those experiencing something similar. I’ve had many people contact me, asking for more specifics. What was the nature of my crisis? What caused it? How long did it last? How did God bring me out of it? I understand why they ask: they’re looking for hope while flying in the midst of their own scary storm. I really understand.

Not only is the full story too long to recount here, however, but the specifics are not really necessary, and can even prove unhelpful if another’s experience is different than mine. The truth is, the nature and causes of such crises or dark nights are as varied as the people who experience them, just like there are almost endless variations and gradations of meteorological conditions that can make flying difficult and dangerous. Your storm will likely be different than mine.

If anything, it’s most important to remember that Jesus understands what our particular stormy darkness is like (Hebrews 4:15). His storms, from Gethsemane to Golgotha, were far worse than anything you and I will ever know. And he entered them willingly for us, so that we would be rescued from all of our storms, particularly the ultimate storm of God’s wrath against our sin. That’s why he came. His storm crushed him so that our storms would become redemptive for us.

Comparing storms is typically not what is needed. What’s needed is sharing crucial principles and protocols that help keep our planes flying in whatever disorienting conditions we find ourselves. And the one I want to leave you with is this: when your perceptions tell you something different than God’s promises, always, always, always trust God’s promises over your perceptions.

There are too many stories of people whose spiritual spatial disorientation led to a tragic crash because they didn’t trust the instruments. When you are disoriented and confused, remember: always fly by the instruments.